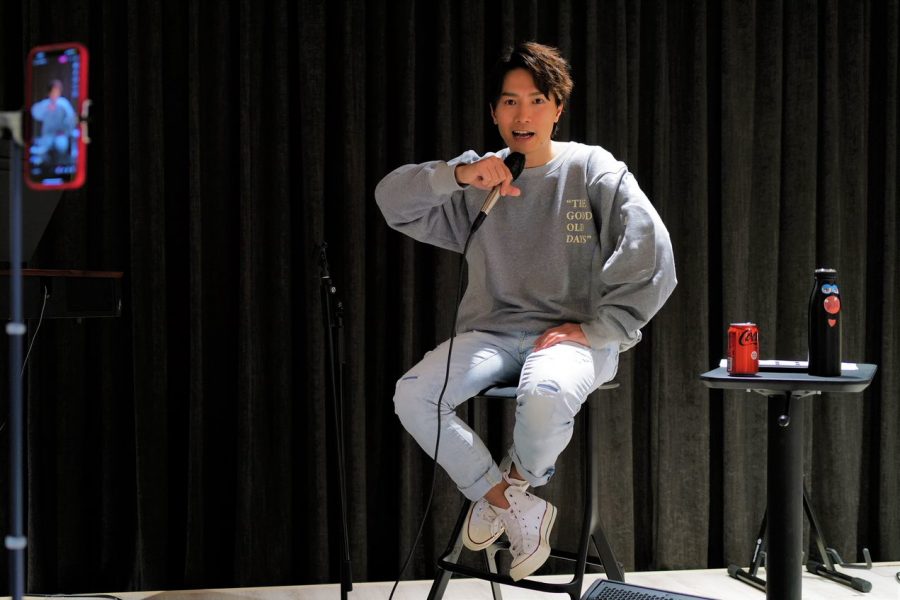 (March 20, 2022 – Hong Kong) The "You Me IG Mini Live" series that Jason Chen recently launched held the second performance last night. After the last time he named and thanked the medical staff in various positions, it was his turn last night. Delivery courier, Jason even sang some songs "related" to courier. He also openly seeks benefits for couriers, hoping that couriers who are still responsible for delivering goods under the epidemic can get help from their bosses.

Jason said frankly: "During our home quarantine or the anti-epidemic period, the courier brought us endless joy. Our meeting time is only 5 seconds away, but we bought the joy they brought us. Booty!" For him, whether it's a courier, a delivery person, or a food delivery person, it's just as risky to get things done, so he thinks that the next time you see these workers, you can express your gratitude. He also shared a little anecdote between himself and the courier he knew: "I am familiar with the same courier who delivered parcels every day. I remember the first time he visited me and opened the door, he was shocked. I felt So proud and so cute!"

Since the courier often drove to deliver the parcels, and there were also infantrymen who delivered to the door, Jason specially selected different "Title" songs, including "Car Key", "Jeep", "Back Row Celebration Banquet" that many fans love to listen to, and Zheng Rong "Traffic Lights", Eason Chan's "Bicycle", etc. The funniest is Jason's impromptu acapella singing "Legend of Speed" by Ekin Cheng. The middle English Rap is even completed without prompting. Jason joked that the drivers of the delivery vans should be fast. , but don't forget to tell everyone to pay attention to traffic safety, and don't run the lights in a hurry. During the live, Jason selected some netizens to leave a message to read. He saw that everyone cheered for the courier and deliveryman in different ways, and some people shared the experience of a friend who is engaged in delivery work, which made Jason better understand and want to express his love to this epidemic. Thanks to the employees who are still sticking to their posts.

There is also an open on-demand singing session today. The first "lucky person" is Jason's daughter, Abi. He sang the English song "Lava Song" for his daughter. Jason's wife, Leanne, also watched the live broadcast. I believe that Abi, who stayed at home, will also join in. Listen to Daddy sing too! In addition, many fans sang Jason's "Thirty Discount" and "Passenger B", and Jason also sang it to everyone's request, especially "Passenger B" has never been sung in public, he thinks: "The song is about little people. In the story, many times we ignore some unremarkable person or type of work, but in fact, they are all part of the whole society.”

Jason not only sang personal works, but also sang songs of many other singers, including MC Zhang Tiantian's "Memory Foam". Jason smiled and revealed that he had played badminton with MC in the inbox of the social platform a few months ago. When the "return of the contract" was made public, fans thought the scene was funny. In the second half of the Live, it was Jason's "Singing K Time". He successively sang "Knot", "I wish you good luck", "Rogue", "The Most Beautiful", "Sad Letter", and "Blossoms and Flowing Water" in response to netizens. Wait, until he was almost reluctant to finish the show, he praised it as fun, and even agreed to the fans to continue to cheer on next Wednesday night.

Chen Boyu's "I Have Me IG Mini Live" cheered the courier practitioners:https://www.instagram.com/tv/CbSqVEmOcdQ/?utm_medium=copy_link